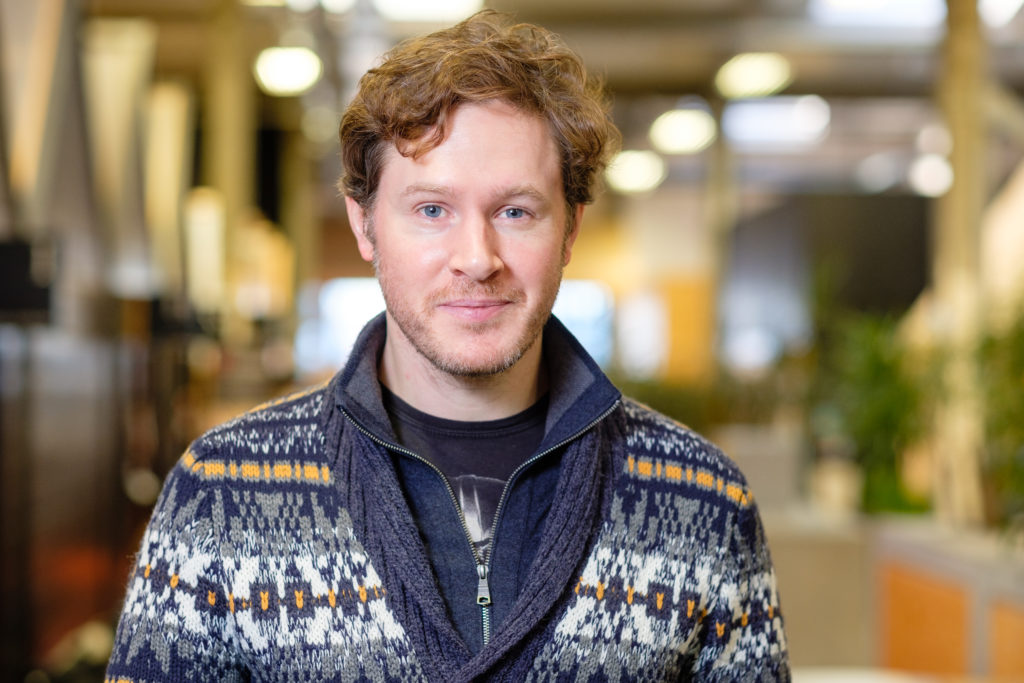 Launched from his home in 2007, Roderick Kennedy’s pioneering digital company Simul has grown rapidly in their Baltic home and now trade with games companies internationally. Here he describes, the journey to Norfolk Street, the importance of timing it right, and their plans to outgrow this new space within a few years.

How big is the Simul team at the moment?

We are three people and we’re looking, if we can find them, to bring in two more by the end of the year. And then another probably three or four by the middle of 2019.

How did life begin for Simul?

I founded Simul in 2007. The previous employer I was working for at the time was undergoing acquisition to Sony and the management were offering redundancy to anyone who wanted to make the leap.

We started out with skies because that’s just what I happened to have been working on in my own spare time. Initially I thought we would make a tool to render skies for people to use as images in games, but after working at it for a couple of years I realized it was actually feasible to have real-time rendering of skies and clouds and that would add quite a lot to games.

The growth of the market was quite slow, so for several years it was just me, working from home, or from a desk in the Daresbury Innovation Centre. But a few years in, I think about 2011, there was enough revenue in the company to think about getting an office, so we applied to Baltic to take one of the sheds.

When I heard about Norfolk Street I was really keen that we could get somewhere we could expand into, and that would see us through the next few years. I really like the atmosphere in the Baltic Creative, I like the ethos of it, and it’s been a good kind of support for us as we’ve grown.

What attracted you to Baltic Creative?

At the time I thought it would be the ideal place to get our first office because of the convenience of where it was. I was living quite near the centre of town, so it’s a very short drive. At the time there wasn’t much in the Baltic besides Baltic Creative. It’s grown as well – just since we’ve been here it’s become a lot busier, there’s a lot more happening and a lot more facilities here. It’s kind of grown up around us a bit.

Do you socialise and collaborate with the other tenants?

We have no customers in the vicinity. Most of our customers are in the USA, continental Europe, Korea and Japan. It’s not a source of business for us being here, but it’s a network, it’s a good group of people who are generally very creative, technical and diverse, so it’s good to have that network.

There’s a relaxed atmosphere, it’s very friendly, very open. It’s quirky, it’s a little bit counter-cultural, which I like. I really love the juxtaposition of the office and the social space. It makes it a much more comfortable place to go through your working day.

There’s a café right there. It’s a campus. It’s a community, rather than just being offices. We’ve done business in terms of hiring people to do websites, marketing, all that sort of thing. We’ve found people in the Baltic who can do what we need, so that’s been a tremendous advantage. If we’d been in a normal office we’d have had to go out and find those people. Without that concentration we could have been going all over town to find who we need. It’s great that it’s all brought together here in the one place.

What was your background before setting up Simul?

I’d been working in games making PlayStation games and before that I’d completed a doctorate in plasma physics. A big part of the direction where the games industry is moving is introducing more and more elements of simulation, of realism – physics is a very natural fit for that. Physics and mathematics. So when we’re hiring we’re generally looking for people with strong physics and mathematical backgrounds.

How hard is it going to be to find the people that you want? That’s quite a niche skillset.

It’s difficult. We look for people who are C++ coders, and that’s a minority language now when a lot of people are learning Java or C# even at a university level – they’re being taught these newer languages, less low level, less highly technical. We’re looking for people with fairly old-school skills, but we’re also looking for people with knowledge of modern graphics hardware.

To find people who have all that plus maths and physics is quite a challenge and they’re quite sought after. Not least because people with those skills can go to London and work for a bank. So we have to compete with that and we have to think about what we can offer. We can compete on salary to an extent, but we don’t have bottomless pockets.

How will the move to Norfolk Street contribute to that attraction?

It gives us a unique working environment. It’s shaping up to be a very nice space, lots of room to grow…it will make you feel good to come in and work there in the morning. Obviously, it’s going to have all the facilities that we need … but I think it’s very positive for recruitment if we can point to a building like that and show people what’s around, what’s going on in the area, the environment that they’ll be working in, because that’s a big part of your life.

It’s also vital that it’s in Liverpool, because there are places that you could put a building like that and people couldn’t afford to live nearby because of the property prices. That’s becoming a difficulty in some parts of the country, even outside London, but Liverpool is still reasonable, it’s still quite liveable.

Where do you see yourselves in the future? What does 2021 look like for Simul?

We’re branching off into some different technological areas and if the plans come off then we could grow to 20, 50 people. If that happens we’re going to need even more space.

But I think we need a place at the moment that can see us through to the point where we could have 12, 15, maybe 20 at a push. Then after that perhaps that could be the main office and then we could have a satellite office slightly further away. It depends what happens in the Baltic area in general. We do hope to grow to that level. It would be a big change, but the biggest change for me was going from one to two.

What are you most looking forward to about the move?

What do you see the main priorities for the digital and creative industries in Liverpool moving forward?

That’s not how tech succeeds. Certainly not in the Californian model, which is the most successful one in the modern era. I think we do have to have that change of attitude.

What things do you think the Baltic are doing most right to create the conditions to let companies undertake that trial and error process?

I think coworking spaces are hugely important. I think it could work really well if the Baltic Creative itself created a coworking space and an incubator –  it would be better as an incubator. I think that could potentially be a really good way to get the companies going that will rise up and become new tenants and keep that flowing.

The new £2.6m Digital House (funded by ERDF and Charity Bank) is our next step towards providing high quality affordable space for digital companies in the Baltic Triangle.

Digital House will be ready to let from February 2019. If you are interested in studio space at this development, please contact [email protected].